We’ve recently officially opened our newest escape room The Competition. It’s been a long process. We’ve started desiging it in April 2015, started construction in July 2016 and finished it in November. We have been tweaking and improving our newest escape room ever since. We’ve worked together with a large group to bring this escape experience to live.: a product designer-drawing and modelling all the elements; a music composer-making an awesome soundtrack and soundeffects; a construction crew- custom building all the escape room elements, a filmmaker-shooting a great intro and promo movie for us, and a group of electrical engineers-making all the little gadgets and electronic games. 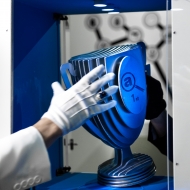 For our newest escape room(s) we wanted to make “something else”.

First, we thought it would be great to have teams compete against each other. However, this should not be done in 2 separate and unconnected escape rooms where the teams are completey cut off from one another. We wanted to achieve some level of interaction between the teams throughout the game, in order to make it more interactive. We’ve devised a scoreboard for each team where they can track how far along they are vs. the other team. Next to this we’ve also included elements in the room which allow the 2 teams to “meet” during the game. Finaly, we devised a Safe with 2 doors that both teams have to reach and open, yet with only 1 key to escape. Whoever snatches the key first will become the escpe champion.

For the games we tried to minimize the number of keys and traditional padlocks, and also involve more senses and skills. Having electronic games is always a challenge. We’ve worked together with different electrical engineers, but it has proved difficult to find a good fit of expertise, availabilty and creativity.

About the story: We have had a long debate on whether to make a themed room with an explicit and detailed backstory or whether to focus on the main characteristic of the room, which is Competition.

There has been a lot of debate amongst escape room owners about the role and importance of the story in an escape game. Part advocating the need for a detailed backstory, while others put more focus on the games and perhaps an implicit story. Both positions offer good arguments, though I’m not planning to go in detail now.

For the Competition room we decided to focus on the element of competition and the games. The theme of the room became a Black and White Futuristic Competition “Arena”, where a game master welcomes and introduces the teams to the Competition. We strived to keep focus on the head-to head race between the teams and a detailed backstory could’ve been a bit overwhelming or perhaps distracting from the main objective in this game. That being said in individual escape rooms, we do love a good story and if done well it can certainly add to the charm of the room. The most important factor remains to have challenging and engaging games.

All in all, our newest escape game turned out quite well. Its interactive, challenging and fun. Designing and building it brought new challenges, which proved as a good learning experience for our next projects.