When was the last time, you did something for the first time? Do you ever get inspired and get the feeling that you have found something special, something you can turn into a successful business idea?

This is the exact same feeling David and Beata, two of Amaze’s co-founders felt in the autumn of 2011, when they played a live room escape game for the first time. This happened in the first place in Europe where escape rooms were created – in Budapest – the capital of their native country. After that first game, they contacted David’s cousin – Adam, and insisted that he should also try it. It did not take long before the idea was born. Let’s open an escape room! But how do you turn a crazy, innovative idea that very few people have heard of, into reality?

While the concepts were being set, the trio also had to decide where the location of the escape rooms was going to be. At that point, Adam was working in The Netherlands and David had moved to Budapest, after completing his law degree in Utrecht University, while Beata was studying and working in Budapest. Because of the connection Adam and David both already had with the country, The Netherlands was a logical choice.

After scouting for locations in Amsterdam and Rotterdam, a perfect place was found in The Hague: an old ministry building, close to the city center. The location, together with the fact that Adam was already living and working in the city made the trio choose the ‘city of peace and justice’ as the seat of their company. 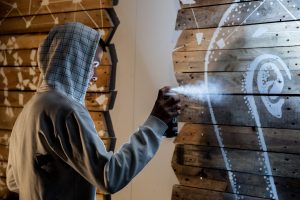 Making the financial plan and designing the rooms, is something that the three of them did together. Their personal stories and background inspired the themes. The KGB room was the first ever escape room in The Netherlands, which is why it was important for the trio to pay homage to their origins and bring back something from the Eastern European history. The Urban Legend room is a street art style room – a tribute to a friend of Adam’s – a graffiti artist who lived in The Hague. The location they found, inspired the topic of the third escape room – The Crazy Doctor, because, as Adam said, it had ‘tiles, stainless steel tables… it really looked like a room ideal for a doctor’s theme.’

Soon after the location was set, at first David, and a month later Beata, moved to The Hague. In those first months, they had to solve a lot of challenges – establishing the business and adapting to the Dutch society, while working non-stop on constructing the escape rooms. 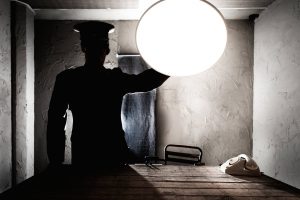 During those first months they also had to find all the equipment and room décor. For KGB, for example, this meant looking for gadgets and gear in Hungary’s markets, antique and military stores and transporting the finds to The Hague. To transport everything they needed for the rooms, the trio used Adam’s old Volvo. On top of it, they managed to transport an old hospital bed, which weighed more than 100kg, from Breda to The Hague, an oil barrel, closets, carpets, building materials – everything needed for the construction process.

While neither of them is an engineer, they managed to build most of the rooms on their own. Adam: ‘At that time it was hard to find people to build the riddles we wanted, so we had to do it ourselves’. The construction process itself took about 4 months, and in August 2013 Amaze Escape Events opened its doors to the first visitors. Bea: ‘We were watching the teams with a small webcam. To give hints we had to alt+tab between wordpad and the timer screen on the computer.’ The first test teams spent about 1h30 inside the rooms and did not make it out, but did manage to destroy some of the puzzles.

The challenges did not end after the company was established. Beata still had to finish her second bachelor’s degree, which luckily she could do from The Netherlands, and Adam still worked at Shell fulltime. David, meanwhile, got his dream traineeship – working for the European Commission in Brussels. The three decided that it is an opportunity he should not miss, even though it would make the next 5 months even more difficult for the starting company. The deal was: David would work at Amaze from Friday late afternoon until Sunday (and back to Brussels on Monday), Adam would be at Amaze after the day at Shell ended and on the weekends, and Beata would cover all of the weekdays. The traineeship ended in March 2014 and right after David moved back to The Hague. In the same month, Adam quit his job at Shell and all three of them started working at Amaze full time. 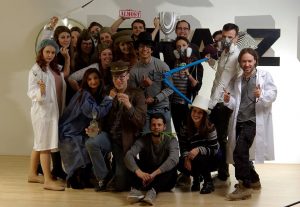 By autumn 2014, Amaze was getting so busy that the three founders could no longer manage the business and handle the teams on their own. This is when the first employees joined the company. The people that Amaze was, and still is looking for, have to be enthusiastic about games, able to think on their feet, with a friendly personality and proactive, so that they can contribute to their own and the company’s growth.

In late 2014, the headquarters moved from the city center to the neighborhood of Binckhorst. The move of all parts of the rooms, the equipment and setting everything into place in the new location, was completed within 3 days of non-stop work. 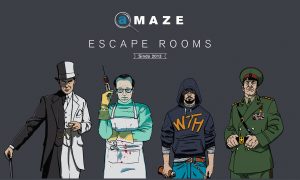 The struggle was worth it, because the new location allowed the company to grow to 5 rooms – the 3 theme rooms from the old location: KGB, Urban Legend and Crazy Doctor, and a new, 2-in-1 room: The Competition Room. At the time of its opening, The Competition was the first escape room of its kind – a futuristic battle arena, where teams fight not only against the clock, but also against each other and there can only be one winner.

To stay innovative, the team has regular brainstorming sessions, where different ideas and perspectives are discussed, and eventually some can be developed. This is how the team designed the concepts that will be involved in the renovation of the KGB and Crazy Doctor rooms: the theme of the rooms would stay the same, however, the gameplay would be elevated and become more immersive, more complex.

So, what is next for Amaze Escape Events? It was a busy summer for the company, with the renovation of the KGB room planned to be finished by September 2017 and of the Crazy Doctor by October 2017. And after that? We are all curious to find out, but what we know for sure, judging by the last 5 years, is that it will be AMAZE-ing!

Written by By Velika Yordanova and Thirza Pluimer.